We revisited Martinique in late April of 1999, for two weeks. Because the island is long with very narrow, winding roads, we had not been able to see all of the island during our first visit. We split this year's tour into two weeks, with the first week at Ste. Anne in the south and the second at Le Carbet in the north. The island's length is along its north/ south axis; the southern end of the island has many nice beaches with white or golden sand, and many of the beaches are in protective coves (called anses locally and on the maps). In the north, especially on the western side, the beaches are shorter and less protected, with the sand being a dark grey or black and of volcanic origin. The north end of the island is dominated by two tall pitons and by the volcano, Mont Pelé. Martinique is a lush, tropical island situated in the southern Caribbean.

Note: Our exchange rate hovered around 6 French francs per US dollar, and gasoline for our car was 6.02 FF per liter.

The economy of the island seems to be based on plantations and on fishing, with corporations handling the farming and individuals doing the fishing from their private boats. The city of Forte de France is bustling and large, with much to see and do, but the population resides predominantly in small towns, villages, and hamlets. The roads generally are very good black top, especially along the coasts, with narrow blacktop, concrete, and gravel roads in the interior. The drivers in Martinique are either wonderfully skillful or maniacs, depending on one's point of view. We drove along at about 60 kph (under about 40 mph) for the most part, and we were mercilessly tailgated by people waiting for the slightest chance to pass us by. We have no idea how they stayed on the road at the speeds they were driving.

We had used Thrifty to rent our car for a trip in Guadeloupe and vowed never to use it again as a result of our experience. The Budget Web page for the Martinique agency quoted a rate of 2767 French francs for an Opel Corsa 4-door or comparable, and we confirmed this rate by email. The rate quoted on the Budget America Web page was a thousand francs higher for the same car in Martinique. Upon our arrival at the airport in Martinique we walked the short distance to the row of rental car counters and talked to the man at the window. His English was excellent, and he confirmed the rate; however, the quoted rate was without air conditioning. If we wanted air, the rate was a thousand francs more. C'est la vie, so we took air and paid the going rate. He called the lot where the cars were located and wrote information on the contract, including the car inventory number, and asked me to initial regarding insurance and to sign for acceptance, and by the way the car is a two-door.

The quoted rate for two-doors was 2620 FF, and he was proposing to rent us one for the same rate as a four-door. We declined and started talking to a competing rental agent in the next window. The Budget clerk immediately called his lot again and located a four-door Kia for us. We took it.

The Kia had power windows, and the window in the left back seat worked fine, but none of the others would go down or up reliably. At our hotel in Le Carbet, they had a gate which a security person had to raise after we told him our room number. We were reduced to holding our key up to the window, since it would not always go down. Such is life in the French West Indies. The car had more power than some of the cars on the road, the air conditioning worked fine, and we lived with the windows problem.

The Weather in Martinique

It rains every day on Martinique. Sometimes a lot. We were there during what is called the dry season, and it happened to rain more than on our last trip during the wet season. C'est la vie. Some of the rain was just a few spritzes which everyone ignored; some of the rain was torrential downpours, worthy of a rain forest. We have plans for rain days, so we just put those plans into action and save our beach time for the sunny days. Often the rain was for an hour or two in the morning or evening; sometimes it rained all day. Plan for trips to museums, distilleries, and other indoor venues when you go to Martinique and save those trips for your rain days. There are plenty of things of interest indoors on Martinique to keep you occupied during the times it rains. 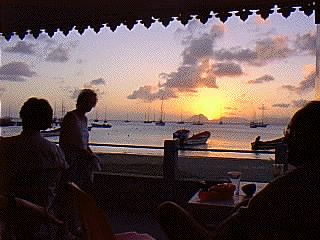 The temperatures during the days ranged from the mid-80s to the mid-90s in Fahrenheit degrees; temperatures at night were often quite pleasant. Most of the restaurants we ate at were either outdoors or not air conditioned, so for lunch we picked beachside restaurants in the south to get the breezes and either beachside or mountain restaurants in the north. The evenings were cooler but still warm enough not to get a chill eating outside. Be careful of mosquitoes during the evening meals. One restaurant in particular was on a veranda swarming with mosquitoes after an evening shower. Our waitress brought a lighted citronella coil and set it under our table, clearing out the bugs promptly but not intruding on the flavor of the food.

Many of the places we visited had people who spoke at least a little English. With our little French, we generally got along quite well. We would expect the larger hotels to have an English-speaking staff; many of the people had spent at least several months in England, and some had lived for years in England or America. Smaller restaurants may present problems for those who understand no French at all, so remember to bring a phrase book if your French is nonexistent or very limited. As with Guadeloupe, we recommend relentless courtesy and always trying French no matter how poorly you fare. (For some people, it was clear that our French was so painful for them, switching to English was their idea.)

Food and Lodging in Martinique

Food in Martinique is reasonably priced and filling, if not wonderful. We suggest that you find a copy of a free pamphlet called Choubouloute and look for restaurants marked with asterisks. We found that those with three asterisks and more were excellent, but more expensive than other restaurants with two or fewer stars. We like wonderful food, so we found the added expense worthwhile. We recommend Le Foulard in Schoelcher and La Plantation Pays Mele outside Fort de France. We had excellent dinners there. For lunch, we had a wonderful meal at Le Fromager, in the hills overlooking St. Pierre and its bay. We asked at several restaurants why they were not listed in Ti Gourmet, the local free magazine listing hotels and restaurants, and we were told that the expense was not worth the return. Be aware that many of the better restaurants are not advertised and that you need to ask around for recommendations. Ask about "restaurants gastronomiques."

Lodgings are available all over the island, ranging from first class tourist hotels in Pointe du Bout and other areas to gites on the side of the road in the poorest rural areas. Although we were always greeted in French, when we said we were from America, we received an apology and a switch to English. For a complete tourist experience, Pointe du Bout fills the bill. The towns in that area are on the beaches at the Baie de Forte de France, nestled in among villas, restaurants and shops. Several other quite nice beaches are a short drive away. The hotel pictured here is Hameau de Beauregard outside Ste. Anne, just a short drive from the town's beaches and from the beach at Saline. It is newly renovated and quite modern, if a little out of the way.

Copyright © 1999, The Civilized Explorer. ALL RIGHTS RESERVED. To print this page from your browser with black text on white, choose TEXT page from the top of this document. NOTE: We use small GIF images on these pages. Larger JPGs are available in thousands and millions of colors from the Photo Pages.